Two surveys were sent out for A Level. The first for the exam day where all boards had a paper being sat. The second was only for OCR centres as they have a second paper on a different day. There were 97 responses to the first survey and 6 responses to the second. As there was a small response to the second survey and the data were collected anonymously, the results have not been included in the analysis, except for the questions which allowed for free text responses. The percentages throughout are rounded figures so may not add up to 100%.

The first question asked which 2016 specification the students completed. 2 responses were removed from the analysis, both of which did not state their chosen exam board. 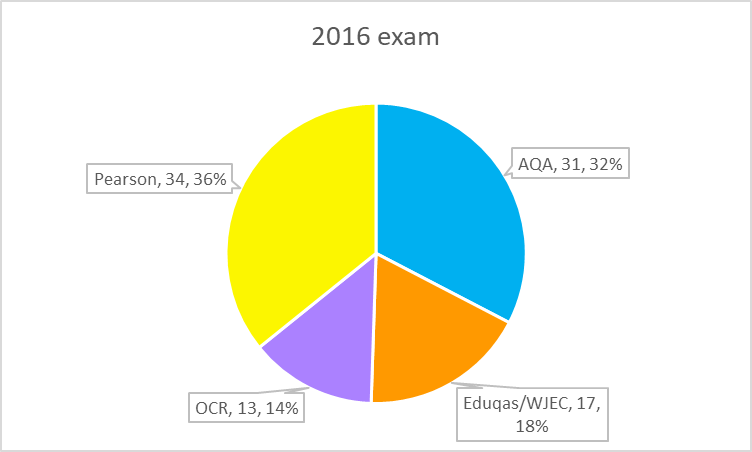 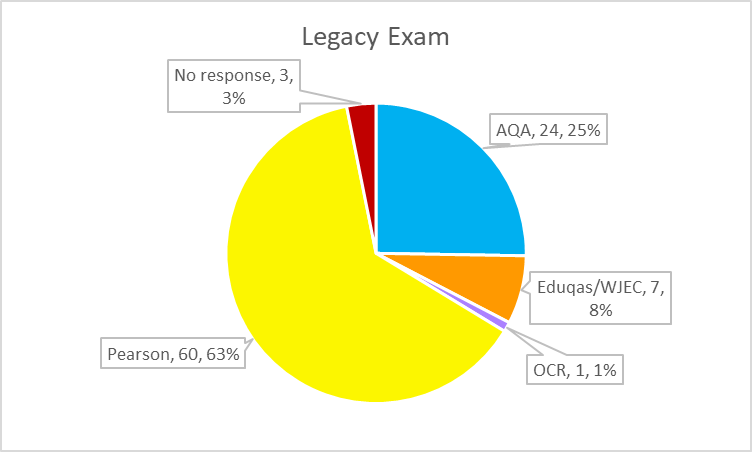 The legacy specification results are not entirely representative of the entries for the previous specifications. OCR did not offer a Drama A Level, offering performance studies instead, a qualification which was not reformed. There does appear to be more stability at A Level than GCSE. Most of the movement appears at A Level to be away from Pearson. 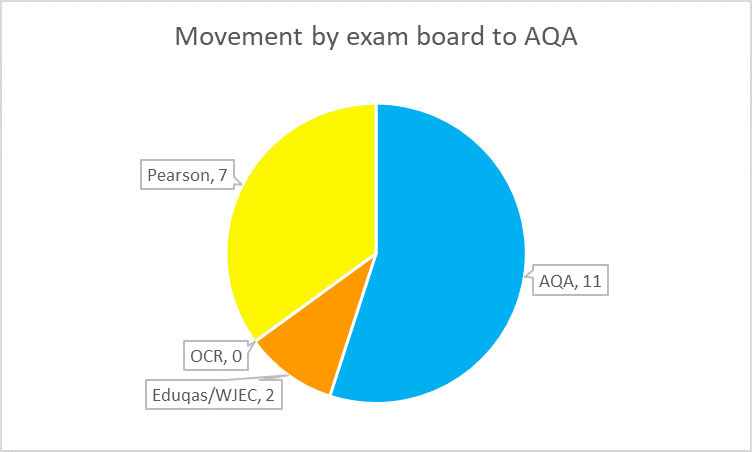 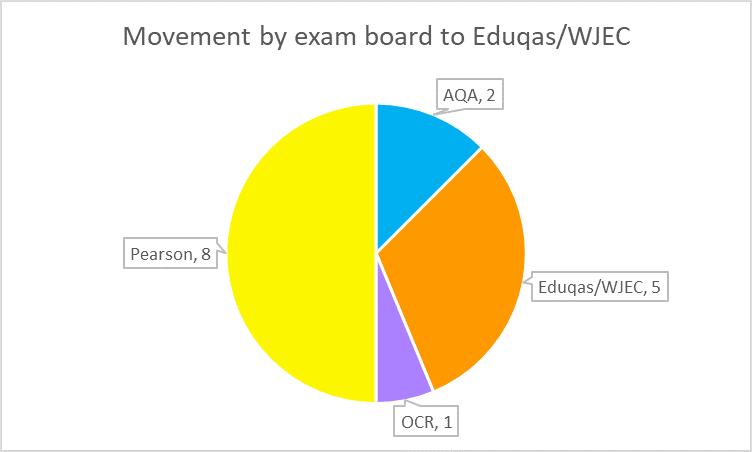 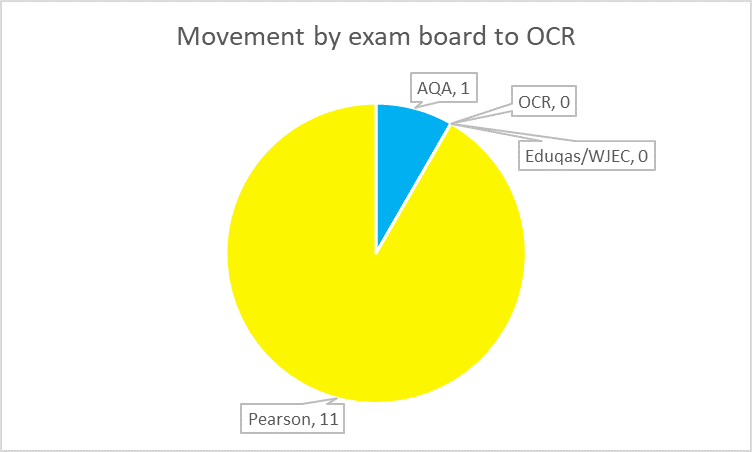 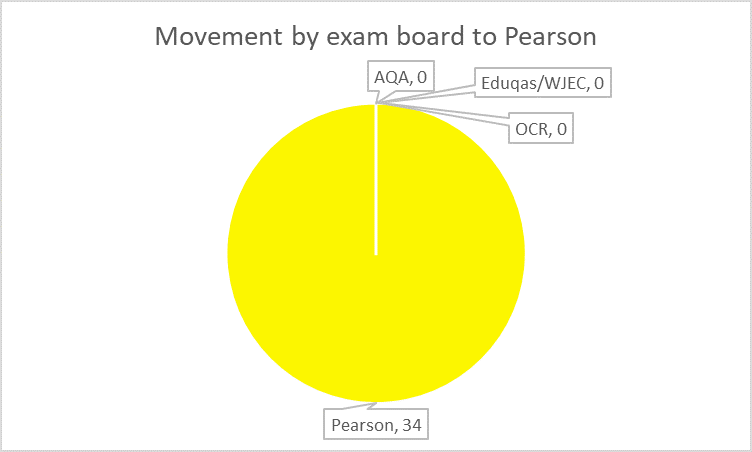 The next 3 questions answered how teachers felt about the exam. The first question asked if the exam was what teachers were expecting. It had 5 options, yes, sort of, not really, no and not seen. 1% of teachers responding had not seen the paper. The responses were more heavily weighted towards the positive options with 51.5% saying yes, and 39.2% saying sort of. 6.2% said not really and 2.1% said no. Broken down to each exam board shows that teachers of all boards were generally positive about the A Level papers.

The next question asked if the exam was similar to the sample papers (SAMs). It had the same 5 options as the previous questions. The responses here were positive with only 5.2% saying no, all Eduqas centres, and 4.1% saying not really. 38.1% said sort of and 50.5% said yes. Broken down to each exam board shows that teachers of AQA and Pearson were a little more positive about the exam than the other two boards.

The last of these questions asked if teachers were happy with the paper. The results here generally mirrored the previous questions. The responses were more heavily weighted towards the positive options with 56.3% saying yes, and 30.2% saying sort of. 10.4% said not really and 2.1% said no, all of which were Eduqas centres.

There were 2 questions in the survey which allowed for text responses. These were:

The comments didn’t have any key themes which spread across all the exam boards. There was one comment which did not relate specifically to the exam and this was not reported. This was about the customer service provided by exam board.

The results to these questions have been broken down by exam board. The proportion of comments mirrors the proportion of teachers who said they were happy or unhappy with the exams. I haven’t commented on the general positive or negative comments which haven’t given any specific details.

On the whole, the comments were generally more on the positive side. The common theme across the comments for AQA was that the students had to write too much for the amount of time available in the exam.

The Eduqas responses were mixed with some positive comments, however, a number of concerns about Section B were raised. There were only a small number of specific comments provided.

The comments reported below include the comments from both surveys which includes the 6 responses for the survey on the second exam paper. The comments were a mix of positive and negative feelings, with specific comments on concerns about the Heroes and Villains theme in paper 1 and the wording of the questions in paper 2.

The responses for Pearson were positive on the whole, with criticisms of the choice of extracts and issues with page numbers for extracts.

The other 2 questions asked about results and future cohorts.  The first asked if teachers are expecting good results in August. There were 5 options: yes, maybe, not sure, no and no idea. The majority of teachers were unsure although only 7.2% said no. 21.6% of teachers said yes with 30.9% saying maybe, 23.7% said not sure and 16.5% said no idea. One challenge here is that my question didn’t define what ‘good’ meant. In my mind, this meant that the students would achieve the results that the teacher would have expected for their ability, but this may not be what the respondents understood the question to be.

Broken down by board it shows that teachers are really not sure about their results for any board.

The last question asked whether teachers were planning on changing exam boards. There were 7 options given for this question. They were: yes (decision already made), probably, waiting for results before making a decision, maybe, probably not, definitely not and not my decision.

The analysis by exam board shows that there is the potential for some movement between exam boards after results day. Broken down by board this looks like the majority of teachers are planning on sticking with their choice at A Level.

Making the assumptions that the ‘yes’ and ‘probably’ groups do change, the ‘probably not’ and ‘definitely not’ don’t change and 50% of the other groups do decide to change, it means that approximately a third of teachers may be changing specification after the first exam. Breaking that down by board shows how unhappy teachers were with the exams, especially teachers who chose OCR.

Percentage of teachers who may decide to change boards.

I am keen to keep teachers up to date with interesting research and useful information, without distracting adverts or expensive paywalls. Like what you read? Why not make a contribution in order to help to support my work.