After the first exams for the new reformed specifications in Drama (and Theatre) I ran surveys to gather feedback on teachers’ responses to the exams. This was designed to capture ‘gut-reactions’ on the examined assessment components and not an overview of the whole course. The GCSE survey received 500 responses. The A Level surveys received 103 responses.

I have analysed the data and presented the findings below. I have attempted to report the statistics in an as unbiased way as possible and welcome questions on any of the findings. There were no compulsory questions, however, most respondents answered all the questions. A very small number of responses didn’t fit with the categories provided so have been removed from the analysis as outliers where they didn’t fit in easily.

To read about the A Level Exams click here.

There were 500 responses to this survey. The first question asked which 2016 specification the students completed. 8 responses were for WJEC which has been added to the Eduqas responses as they are run by the same company and have similar assessments. 3 responses were removed from the analysis. 1 stated no exam board, 1 stated BTEC and 1 stated iGCSE. 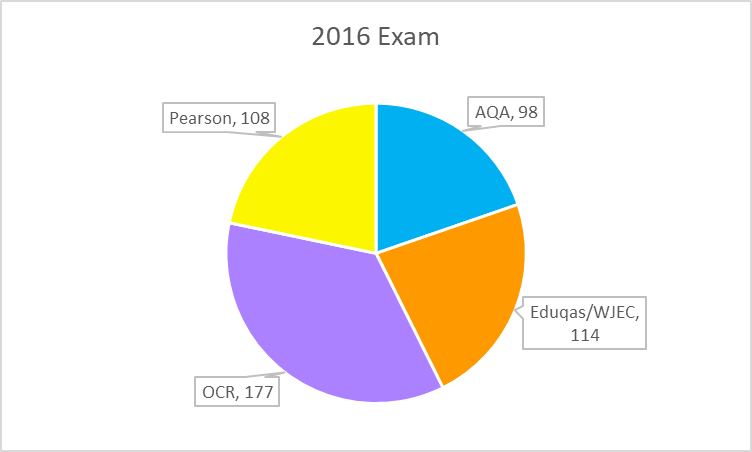 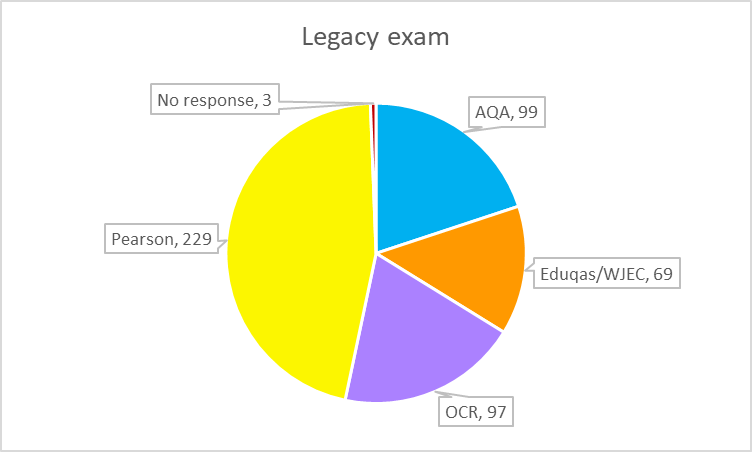 From the survey, it is safe to assume that Pearson is no longer the market leaders at GCSE. This mirrors the surveys that have been completed previously, in particular, the one completed by National Drama after the Which Board to Tread event. The legacy specification results are helpful to show the breakdown of teachers responding to the survey. In 2017, the entries for OCR and Eduqas (WJEC) were lower than the percentage of responses on the survey, which may mean that the responses for the new specifications will not be entirely representative of the actual entry percentages which will be released on results day. No respondents said they had moved from a vocational qualification (such as BTEC) to a GCSE course.

It was clear early on that a lot of teachers ‘shopped around’ for the new specifications and there was going to be a lot of movement between exam boards. This is reflected in the survey too, however, over 50% of all exam board respondents stayed with the same exam board as their old specifications. 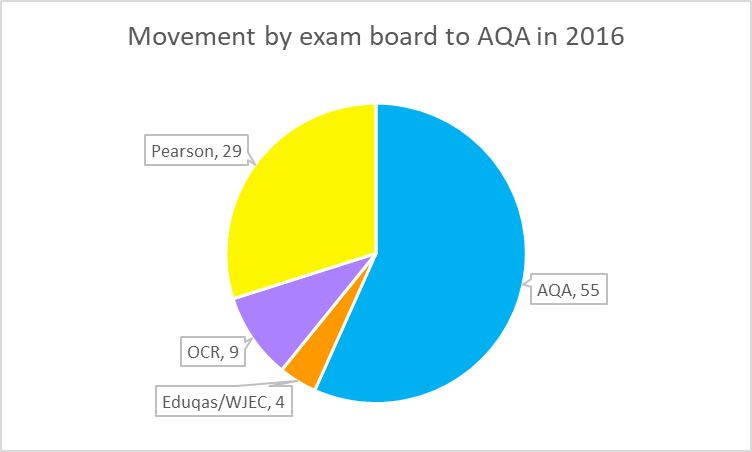 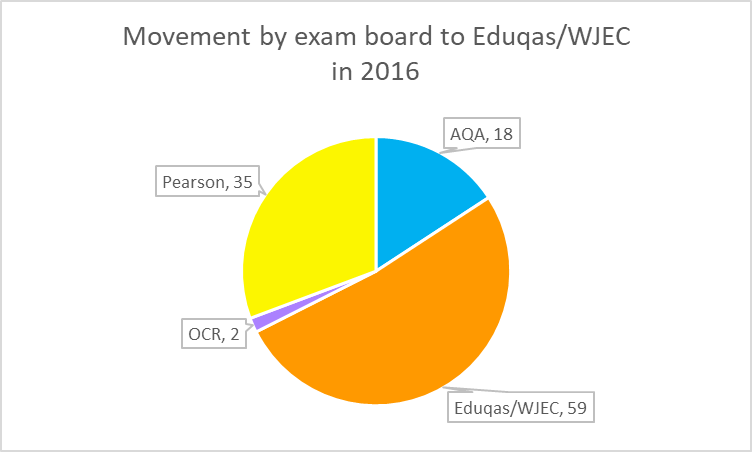 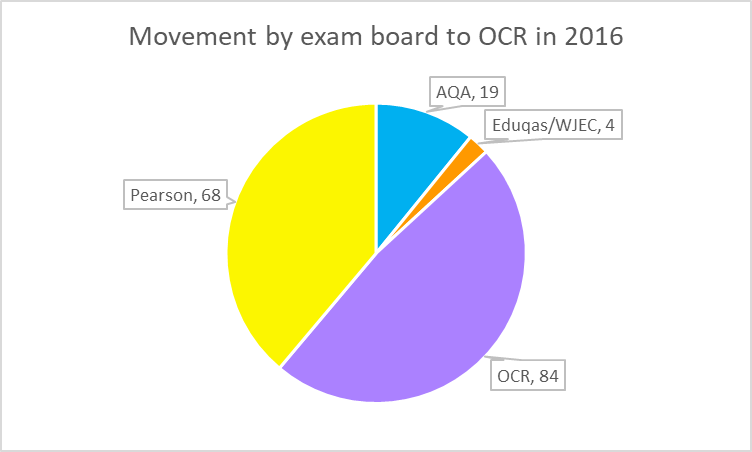 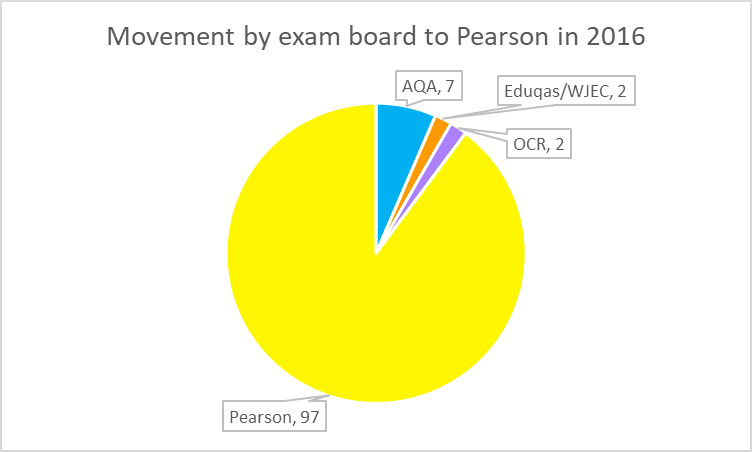 The next 3 questions answered how teachers felt about the exam. The first question asked if the exam was what teachers were expecting. It had 5 options, yes, sort of, not really, no and not seen. 5.4% of teachers responding had not seen the paper. The responses were more heavily weighted towards the positive options with 32.2% saying yes, and 26.4% saying sort of. 19.2% said not really and 16.8% said no. Broken down to each exam board shows that teachers of AQA and Pearson were more positive about the exam believing it was more what they expected than the other two boards. Percentages below are rounded figures so may not add up to 100%.

The next question asked if the exam was similar to the sample papers (SAMs). It had the same 5 options as the previous questions. The responses here were slightly weighted towards the negative options with 30% saying no, and 19.4% saying not really. 16.2% said sort of and 29.8% said yes.

I believe that this may be partly due to the number of teachers who had not taught a written exam at GCSE before and there has been little training available on understanding assessment principles. This isn’t a criticism, merely an observation, and is partly due to some of the restrictions in place by the regulators, and partly due to the confidential nature of exam materials and assessment strategies. I don’t have an answer for how to improve this, but it is an area that has interested me having worked in assessment. It is something I am thinking carefully about.

Broken down to each exam board shows that teachers of AQA and Pearson were again more positive about the exam than the other two boards. Percentages below are rounded figures so may not add up to 100%.

The last of these questions asked if teachers were happy with the paper. The results here generally mirrored the previous questions. The responses were more heavily weighted towards the positive options with 31.7% saying yes, and 29.5% saying sort of. 20% said not really and 17.8% said no. Percentages below are rounded figures so may not add up to 100%.

There were some key themes that appeared across all the exam papers. Responses across all exam boards included positive and negative sentiments. The recurring comment across all exam boards was that the exams were too short for the number of answers required from students. Comments which did not relate specifically to the exams were not reported. These included responses describing teachers’ and students’ comments on social media, the 40% exam weighting and exam boards not publishing grade boundaries before the exam (They are not created until after the exam), and customer service provided by exam boards where it is not specific to the exam component.

Most of the comments for AQA were unique or there were 2 similar responses. The comments have been collated and then alphabetised.

The responses varied for the Pearson paper, however, there were some common themes. These have been summarised and collated.

The other 2 questions asked about results and future cohorts.  The first asked if teachers are expecting good results in August. There were 5 options: yes, maybe, not sure, no and no idea. Only 9.4% of teachers said yes. 24.2% said maybe, 33.4% said not sure. 15.6% said no and 17.4% said no idea. One challenge here is that my question didn’t define what ‘good’ meant. In my mind, this meant that the students would achieve the results that the teacher would have expected for their ability, but this may not be what the respondents understood the question to be.

Broken down by exam board, it shows that teachers are really not sure about their results for any board although OCR teachers are definitely less confident their students will do well on exam day.

The last question asked whether teachers were planning on changing exam boards. There were 7 options given for this question. They were: yes (decision already made), probably, waiting for results before making a decision, maybe, probably not, definitely not and not my decision.

The analysis by exam board shows that there is the potential for another large move of board after results day. One outlier response is interesting, and I feel I need to report it. The response states that the teacher had invested a lot of time and effort into creating resources and a lot of time learning about the delivering the new course. They want to change board but probably won’t because they don’t have the capacity to take on the workload associated with changing boards. I wonder how many of the ‘probably not’ group have selected that for the same reason.

Making the assumptions that the ‘yes’ and ‘probably’ groups do change, the ‘probably not’ and ‘definitely not’ don’t change and 50% of the other groups do decide to change, it means that approximately a third of teachers may be changing specification after the first exam. Breaking that down by board shows how unhappy teachers were with the exams, especially teachers who chose OCR.

Percentage of teachers who may decide to change boards.

I am keen to keep teachers up to date with interesting research and useful information, without distracting adverts or expensive paywalls. Like what you read? Why not make a contribution in order to help to support my work.